As you very well know, I’ve been on a bit of a hiatus for the summer. Sure I’ve been traveling and keeping an eye on sports but if I’m being totally honest, this year has not been what I had imagined since I got back together with my first love, New York City.

I had big plans and grand visions both personally and professionally and unfortunately, life doesn’t always play by your rules. This is a lesson I’ve attempted to learn many times, but I think this time it’s gonna stick. Well enough about why I’ve been on break, the important thing is that I’m back and inspired by what I’m hoping is my last little stop on this streak of unfortunate luck.  It’s a bit of a long story, but it’s worth it.

If you’ve kept an eye on my social media, you’re probably aware that I’ve been rocking the ultimate (NOT) summer accessory….a hot pink cast. A friend of mine got hitched in July in Park City, Utah and since she’s not your traditional bride, she wanted a soccer tournament the morning of her wedding. 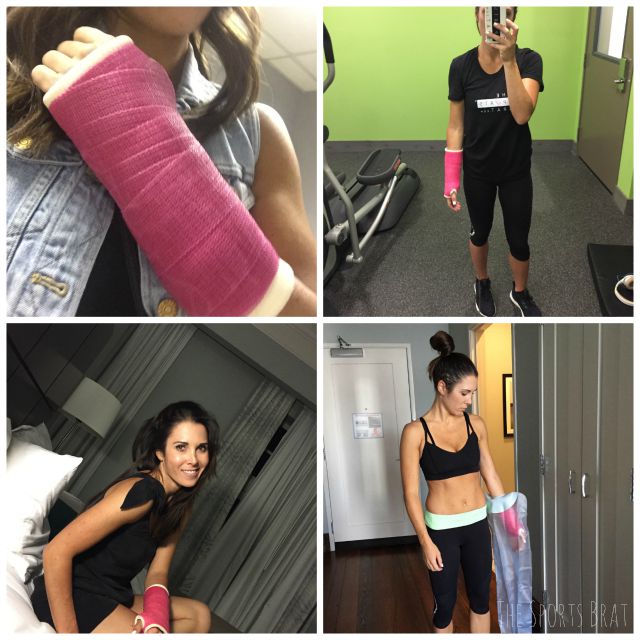 I’m not one to keep quiet, so I expressed my concern that maybe this wasn’t the best idea before her big day. Perhaps that concern came from the fact that I’ve broken my nose 3 times, wrists now 6 times, elbow, numerous toes and my foot. Okay so I’m a tad accident-prone. And trust me, I get plenty of calcium. I like to think its because I go HAM. Kidding.

The bride assured me that it would be fine. She has a way of doing that. I already had a bad cut on my foot from a stand up paddle board/dock incident the weekend prior in East Hampton, but that’s neither here nor there, so I was unsure whether I would participate or not.

Here’s the thing behind my passion for sports. Some people don’t take me seriously because I’m not a statistician, I’m not a die-hard fan of any given team, I don’t currently play on any teams, and I stand behind the fact that its ok to look feminine and cute at a sporting event, if you so please. Fine, it’s not the first time I’ve been called unconventional. But my passion and love for sports is what got me to play in that tournament the morning of the wedding.

I’m the first one to say I had a love/hate relationship with the game. But to this day, there is nothing I loved more in life than game day and hearing that first whistle blow. It’s hard to describe, but the minute I see a soccer field I’m flooded with memories and nostalgia.   But I’m mostly overcome with an insane desire to compete. I cannot sit on the sidelines. This may be mirrored in other aspects of my life as well….but I digress.

So there I was in Park City, approaching a field filled with probably 60 people ready to play soccer. I had to play. I ran around and warmed up and my foot felt good enough to play in these 10-minute matches. 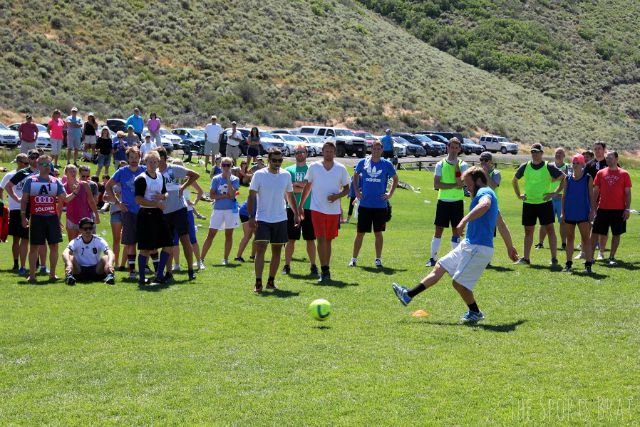 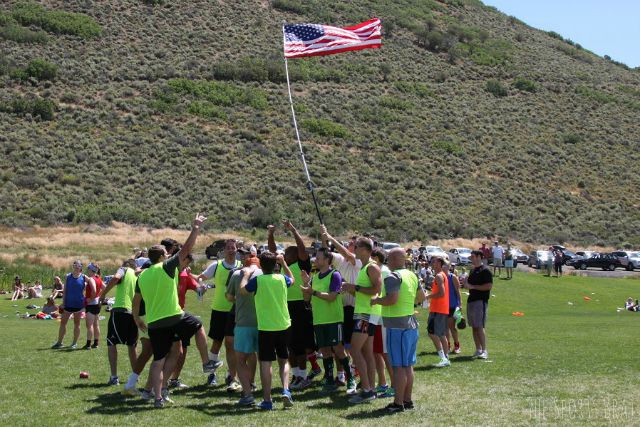 I was on Team Bride. The bride and I actually met in pre-season at Colorado, so it was only natural to play together again. When we were at CU we played up top, as forwards together. Despite all the thought and preparation that went into this tourney, the Bride neglected on key detail: Team Bride didn’t have a goalie.

As we prepared for the first match we decided that I would play goalie. I mostly conceded because there was no way the bride or her bridesmaids were going to stand in the net and be shot at hours before the ceremony. Secondly, I thought maybe it would be easier on my foot. I was also envisioning some easy friendly competition that would allow me to play sweeper/keeper. 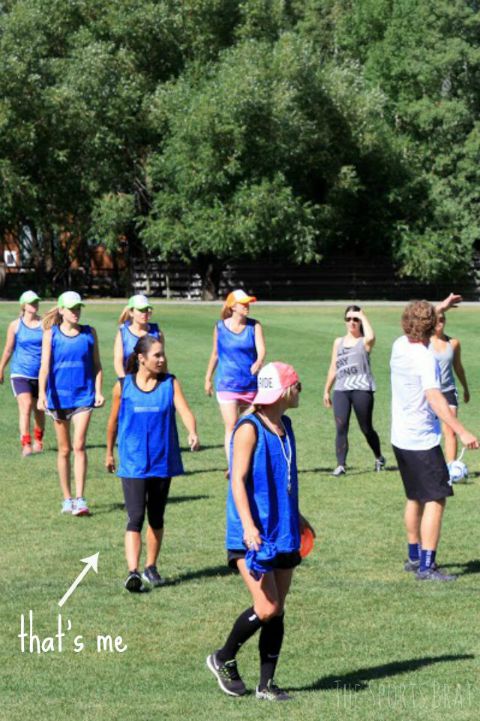 Anyways, I missed part of the first match because the Bride sent me on a bit longer of an excursion than anticipated. However, I was able to return and join them on the field for the last 5 minutes of the game. Our goalie did well, but it was clear she didn’t want to play in the net again for the next match, so I offered. What I didn’t realize is that I just offered to play goalie against the US Ski team. The groom happens to be a ski racer so his extremely fit posse was our next competition. Perfect.

To be honest, I expected myself to be terrible. I have actually never played in goal in my life. Not even when my Surf team would be up 13-0 in a meaningless tourney. The first 2 goals went by with ease. There’s not a ton you can do when a guy is on a break away and you have no clue how to dive. My best shot was to try and come out and cut off angles but hey, I’m a pretty awful defender as well.

As the game wore on, I was able to successfully stop some shots, cut off better angles and end up looking somewhat athletic in the net. On one of the last plays of the game, a shot was taken from a bit further out and I decided to punch save like I had seen keepers do for my entire career when they weren’t able to catch the ball. I didn’t want to jam a finger so I figured this was safe. But again, remember that while these athletes don’t win Olympic medals in soccer, they are still crazy fit and strong.

Upon impact it hurt. I knew this pain. Sharp, hot and triggering memories of casts. But, not unlike my break of 2010, I thought, “there’s no way that could have broken my hand.” The game ended and the bride exclaimed that she had no idea I had those goalie skills in me. I let my pride overtake the pain in my hand.

We didn’t make it to the finals thanks to the 2 goals I did allow, but as we watched I noticed the pain worsening. I kept trying to massage it or do anything to loosen it up and ease the pain. I had a feeling this wasn’t good but again, I had more important things to do that day than see a doc. 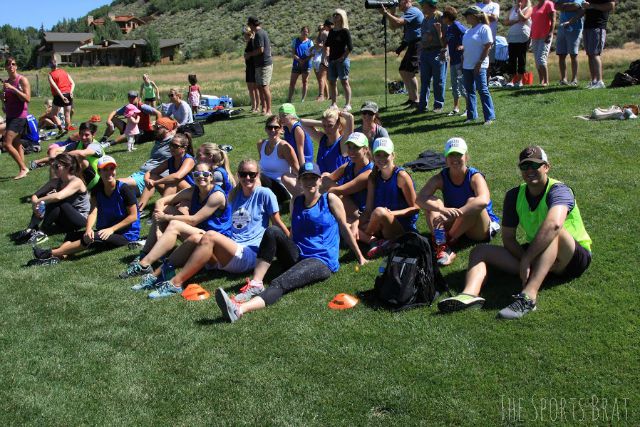 The morning after the wedding, I woke up to find my hand swollen and bruised. I knew I would need to see a doc when I got back to NYC. On Monday I saw an urgent care doc who confirmed the break. She sent me to an ortho that put me in a splint and said, “ice it.” Something didn’t seem right, so I called my ortho from homeand he said, “see Dr. Raskin ASAP kid.” So I did.

Well kinda…the doc wasn’t in and I had a plane to catch so I saw his PA who confirmed the break but broke the news to me that it was worse than we expected because the location of the break. The tip of my ulna broke off completely, its small but floating around threatening the cartilage in my wrist. She decided I needed a cast. But here is where it gets weird…

Have you ever noticed any of my tattoos? I think of them as small little stories on my body that don’t demand too much attention. The newest one I have is an arrow on the outside of my wrist. 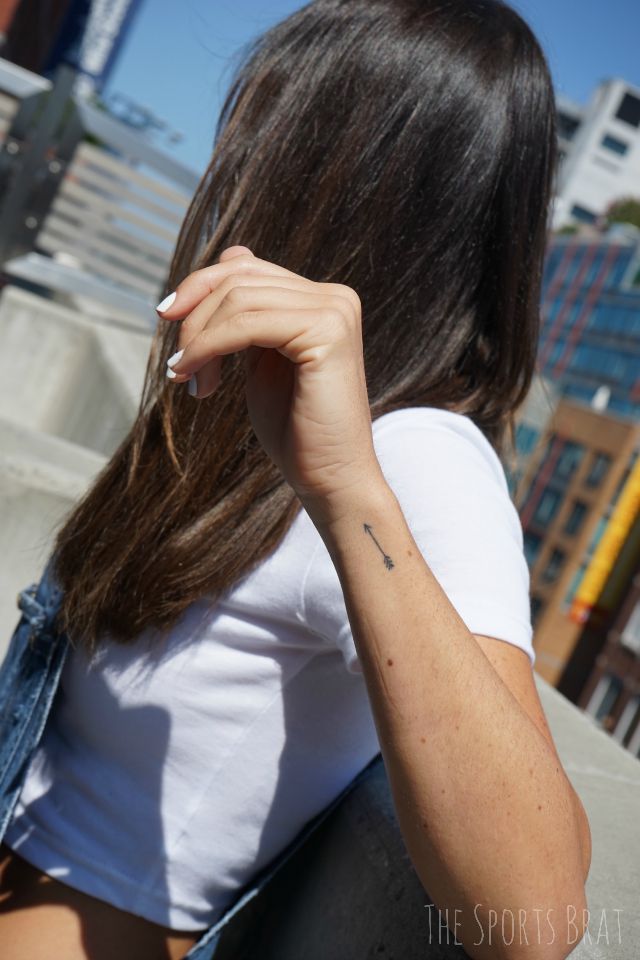 As Gabby went to cast me she said, your tattoo is literally pointing directly to your break. She had never seen anything like it. Weird right?! 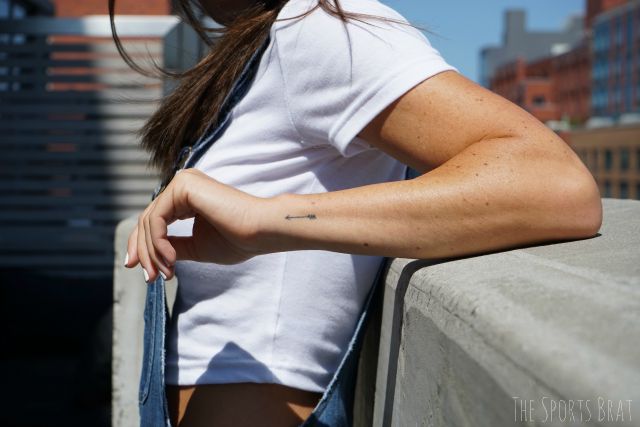 After 2 weeks of frolicking in a hot pink cast in the heat of summer, I went yesterday to have it removed. Every one of my breaks has been without complication so I expected no different yesterday. As I met with Dr. Raskin, he also found the location of my arrow tattoo to be one of the freakiest things he’d seen.

The x-ray showed that the little piece of my ulna had drifted farther from the bone and that there may be some more damage. So he sent me for an MRI to see if I will need surgery. The good news is my cast is OFF but now I’m in a splint that makes it appear like I have carpal tunnel. Not ideal, but I can shower like a normal human again.

As I wait to see if I’ll be going under the knife for my 4th soccer injury, I’ll leave you with this little movie from my cast removal yesterday.