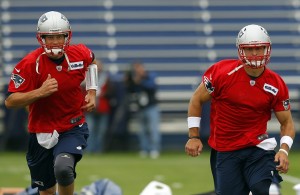 If you don’t know yet, the NFL season is upon us, FINALLY.  Now, not everyone loves Sundays filled with back to back to back games but allow me to introduce you to one of many reasons you should embrace this American tradition…hellllooooo, the guys are HOT!  Now, I’m not a New England Patriots fan and their head coach Bill Belichick gives me the heebie geebies, but even I have to show some respect for two of their most attractive and well-known quarterbacks, together, on the same screen, every game.  So Tom may have had that super questionable 15-story Ugg ad in Times Square and Tim can be a bit over-the-top with his whole “I’m an angel and never do anything wrong, amen” bit, but ladies, you simply cannot argue that these faces (and bodies) make the game a tad less boring.  Thank you Robert Kraft for funding a sexy quarterback roster.