You’re not going to avoid football this weekend. There are two big games: AFC’s Denver Broncos vs. the New England Patriots and NFC’s San Francisco 49ers vs. the Seattle Seahawks. The winner of each game goes to the watched-by-the-whole-world Super Bowl. Yea, two big games.

If you’re a football fan, you’ve already got your plans for watching the game. You know who to root for and maybe even what types of plays to look out for. If you’re not a football fan, you might already be planning a shopping trip or a Pilates class. Hold the credit cards! You can watch the games without having to once utter, “rushing yards” or “pass completion.” (I make no promises about not uttering “tight end” though.) Each team has a shining star, a Championship hottie.

Repeat after me, “The AFC game’s going to be a quarterback battle.” There, football talk officially over. Now, get to the real work: spying the cutie on each team. 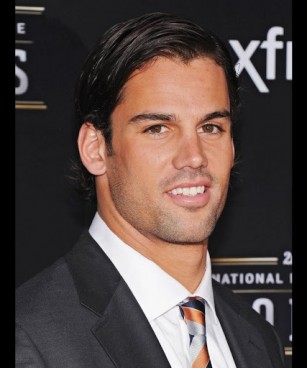 Rob’s got his own rugged look going on. But this big boy’s not western, he’s all about the east – Eastern Europe, that is. His family originates in Croatia, that beautiful little country with more coastline than farmland. Rob grew up on farmland, though – Illinois. This linebacker’s all corn-fed American – fitting, since he plays for the Patriots. Try to look past the mask for those dark-dark eyes, though – that’s all Croat. 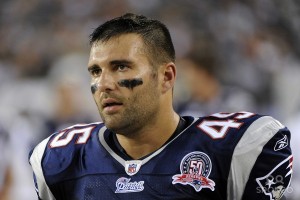 Try this one on for size: “The Seattle-49ers clash will be a fierce showdown.” Ok, moving on to the good stuff.

Do you like tattooed guys? Then Colin’s for you. San Fran’s quarterback has all kinds of ink going on all over his oh-so-muscular chest and arms. In fact, Colin’s started a touchdown celebration fad called “Kaepernicking” – he kisses his bicep. Unlike the showy, kissing-my-muscles move of some weightlifters, Colin’s actually kissing his tattoos “Faith” and “To God The Glory” as thanks. Colin’s also got a pet turtle named Sammy that’s the size of a small human – 115 pounds! When he got the turtle as a kid, though, he predicted that he himself would only grow to 190 pounds, yet now he’s a built 230. I guess somebody’s got to heft that turtle around! 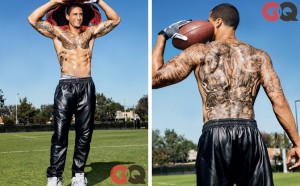 Kam’s officially an “enforcer,” which means his job is to intimidate the other team. In fact, he’s such a hard hitter that opponents tweet about him. No kidding, opposing teams tweet how he’s a guy to be avoided. On the field, he’s a force to be reckoned with, for sure. 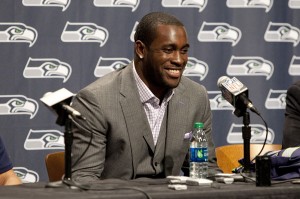 That’s just Kam’s job, though. Look into his delicious dark eyes, and you see it – this is a man who goes hard because he doesn’t forget when he came from. Turns out this hunk grew up with just a single mom working all hours to put her five kids though school.  Well, when Kam finally made good by signing with the Seahawks, he really made good. He bought his mom a brand new Lexus – oh, and a garage (attached to a house, natch) to park it in! Kam knows all about doing what ya gotta without forgetting your past.

So, after you partake in the requisite football chitchat, which of these hotties are you going to be looking for? Do you fancy some cowboy charm, a bit of Eastern European soul? How about a tatted up turtle-lover or fierce enforcer with a heart of gold. Whoever wins on the field, ladies, we’re the real winners!