Any championship match carries drama with the competition. Imagine how much more dramatic when the match is played on the world stage. Add to that a country once divided and still fighting racial tensions… why then, you have sports Nelson Mandela-style.

Everyone knows Nelson Mandela as the crusader against apartheid in South Africa. Maybe not everyone knows the significance sports played both in his life and in politics.

Nelson Mandela was actually an amateur heavyweight boxer at one time. Also in Mandela style, he says in his autobiography, Long Walk to Freedom, that he didn’t appreciate the violence of the sport so much as the science involved.   Mandela stated, “I was intrigued by how one moved one’s body to protect oneself, how one used a strategy both to attack and retreat, how one paced oneself over a match.” In fact, during his 27 years in prison, Mandela kept up his fitness regime.

However, thanks to the 2009 movie Invictus, Nelson Mandela’s connection to sports is best known concerning the 1995 Rugby World Cup. South Africa hosted the championship. More significantly, the Springboks, South Africa’s team, qualified for the finals. While normally a country’s team qualifying for the finals of a championship serves to bond people within a country, the Springboks were a controversial team. Their emblem was associated with whites-only sports, and non-whites in South Africa viewed them with distrust. 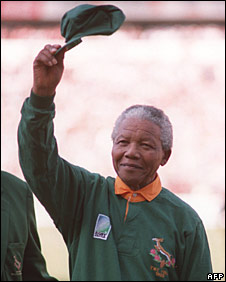 Nelson Mandela knew this. He obviously also knew he had to make grand gestures to unite his country. “Sport has the power to change the world,” he once said. He talked about sport’s ability to inspire and create hope, “It has the power to unite people in a way that little else does.”

So, what was Mandela’s grand gesture? Prior to the match in which the Springboks were fighting for the championship, Mandela walked onto the field wearing the distinctive green and white of the Springboks. In front of the whole world he was sporting the antelope emblem that had been symbolic of whites-only sport in South Africa.

Mandela was quoted as saying many times that if he maintained hate in his heart, he would remain a prisoner. By the time of the Rugby World Cup he had been a free man for only five years and president for only one. With his one gesture that day, he was declaring unity for the people of South Africa. Mandela, the first black South African president, the man who spent 27 years in prison for his anti-apartheid beliefs, showed how not to hold hate in the heart.

The Springboks won the World Cup. Of course they did. Yes, this is reality and the opponents, New Zealand, could have taken the Cup. But they didn’t – the Springboks did.

Obviously one match didn’t wipe out 50 years of hate and mistrust in the country. However, for at least awhile, all South Africans had something to cheer about together.

Nelson Mandela in his Springboks jersey – one of the most iconic images of that time.

Written By
TheSportsBrat™
More from TheSportsBrat™
It ‘s no secret, when the holiday season comes around weight gain...
Read More