Let’s start with the “why” – Why should you be excited about the NBA Playoffs? Tall athletes wearing shorts and tanks – why wouldn’t you be excited?

Plus, NBA basketball is fast-paced and high-scoring. There’s always something going on, whether it’s a basket, a free shot or a foul. Every now and again one of those towering dudes either goes flying through the air to dunk the ball or crashing to the ground because he’s been fouled.

Come playoff time, they start flying up and crashing down with more frequency. Exciting stuff!

So, let’s see how the playoffs work in the NBA and who the teams to watch for are. 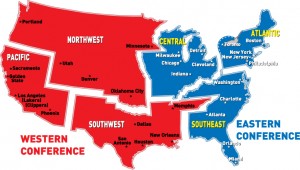 Remember everything you learned about the NCAA March Madness Tournaments? Sorry – that’s not going to help you much here. Did you brush up on your NHL Playoff tutorial? Slightly more useful, but the NBA Playoffs are their own unique animal.

So, the NBA consists of an Eastern Conference and a Western Conference which corresponds roughly with geography. (I’ll get to that in a moment.) Each conference is divided into three divisions.

These divisions play a little loose with geography. For instance, Denver is in the Northwest, not Southwest. Maybe that’s because New Orleans is taking up a spot in the Southwest instead of the Southeast. But then, Washington D.C. is in the Southeast, so… I guess it’s tough dividing two conferences into three divisions made up of five teams each – sounds like those word problems in grade school only one kid could do. (Guess we know where he works now!)

Anyway, the whole point of the regular season is to amass a record that allows a team to enter the playoffs, which begin mid-April and run about two months.

The top eight teams from each conference get to go to the playoffs, with a provision in the rules that the leader in each division definitely gets in. (I don’t know if it’s mathematically possible to win the division and not be a top-eight team, but there you have it.)

Teams play best-of-seven series. The first two games are played on the better team’s court, the next team on the underdog’s court, then they bounce back and forth between courts until someone wins or gets air sick. (That’s a rare provision… ok, I made it up.)

Who to Watch For 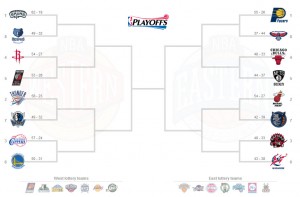