The summer sports focus may be on the World Cup and the hunt for October in the MLB BUT let’s take one last look at the NBA Champs and their impressive run for the title. 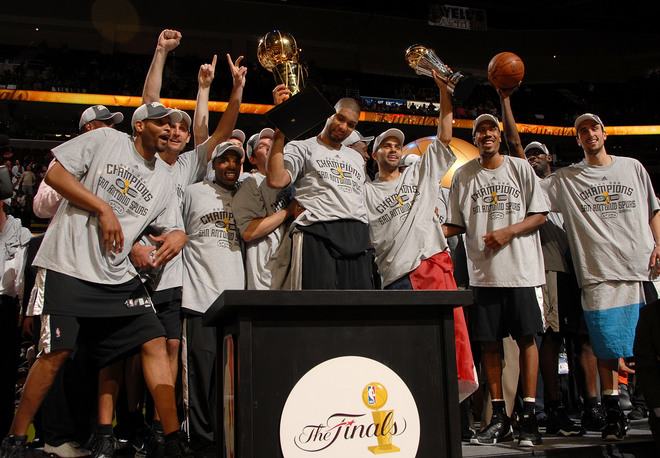 The San Antonio Spurs have claimed their fifth NBA Championship since 1999 by beating the Miami Heat. One player, 38-year-old Tim Duncan, was a starter for all five. In fact, he’s the first-ever starter to win in three different decades. Wow.

Speaking of records, the San Antonio Spurs were all about setting them this season.

The Spurs looked primed from Day 1 of the regular season to win the NBA championship. They came out playing great basketball – perhaps feeling they had unfinished business from the 2013 playoff series, when they fell to the Miami Heat in the finals.

The Spurs continued to improve, winning a league-leading 62 games in the regular season. They even went 19 games without a single loss – that’s a lot of basketball. They won just over 75 percent of their games – the best of any San Antonio team.

They then dominated the playoffs. As they marched through the bracket, their defense evolved to being Number 2 overall. Offense wins basketball games, though, and theirs was Number 1. They won the championship in a “gentleman’s sweep,” five games. (Ie. they “let” the Heat win one, as gentlemen.)

Basketball players sometimes get a rep for playing like superstars. Well, the Spurs showed what happens when you’re a superstar that plays a team game. The Spurs are known for having a machine-like system in place. If players buy into the system, they go to the greatest heights.

Even opponents have to agree with how effective their system is. LeBron James, whose team the Miami Heat fell to the Spurs in the NBA Finals, admitted to Sports Illustrated, “They were the much better team. That’s how team basketball should be played. It’s selfless. Guys move, cut, pass, you’ve got a shot, you take it. It’s all for the team, and it’s never about the individual.”

It was all about the team effort. No player on the Spurs averaged more than 30 minutes a game. Meaning, even if the game was down to the wire, the stars didn’t just take over. That’s guts on the coach’s part, to keep sending your role players out when the team is losing.

No one has ever called San Antonio coach Gregg Popvich gutless, though. Quite the opposite – he’s renowned as a maestro of basketball.

Most professional sports teams hold a victory parade for their fans after winning a championship. The Stanley Cup champion LA Kings held two, including one by the beach. Even the Super Bowl-winning Seattle Seahawks held a parade, though it as a mite chilly in February.

The Spurs are no different — well, a little different. Rather than perch the players and coaches on the back of convertibles or even on top of tour buses, they floated them down barges on the San Antonio River. That’s right – like Egyptian royalty once floated down the Nile, so went the San Antonio Spurs.

About 100,000 people lined up on the San Antonio River Walk to watch their heroes float by. According to ESPN.com, another 75,000 packed into the Spurs’ home arena, the Alamodome.

Spurs fans aren’t ready to forget the 2013 loss, but that’s ok. They cheered the desolate San Antonio players returning from that defeat, and they cheered the winners floating by on barges.

And that is a model of a true sports fan.