Ok…on this Monday morning I want to talk about two of my favorite things, handbags and football.  Our Special Contributor, Nadia Archuleta breaks down a very important topic: the NFL handbag policy.  As an employee at Denver’s Sports Authority field at Mile High, she’s seen first hand just how far ladies have gone to get into the stadium.

There are few accessories more personal than our purses, right? I mean, you probably keep your whole life in your purse: phone, wallet, keys, makeup, ticket stubs, spare earrings, unmentionables… you name it. Honestly, I don’t know how guys get away with just having pockets. (More on that later.)

Not only are the contents of your purse significant, but the purse itself is an important choice. Maybe you’re a gal who went all-out on a designer purse that you carry literally everywhere. Alternatively, you might have a purse for every outfit. Are you a lady who loves vintage? Then your purse is bound to be one-of-a-kind and irreplaceable.

Imagine your dismay, then, if you have to chuck your beloved purse into a trash can next time you go to an NFL game.

Unfortunately, we live in a world in which bad people do bad things – and some of them really want to make a name for themselves by doing them. So, the NFL decided to beef up security across the board.

As a wand-wielder charged with counting people’s change, I can tell you purses don’t get in when they are too big. In truth, your evening clutch might not make the grade, much less your day bag. In short, the purse cannot be any bigger than a standard sheet of paper folded in half. 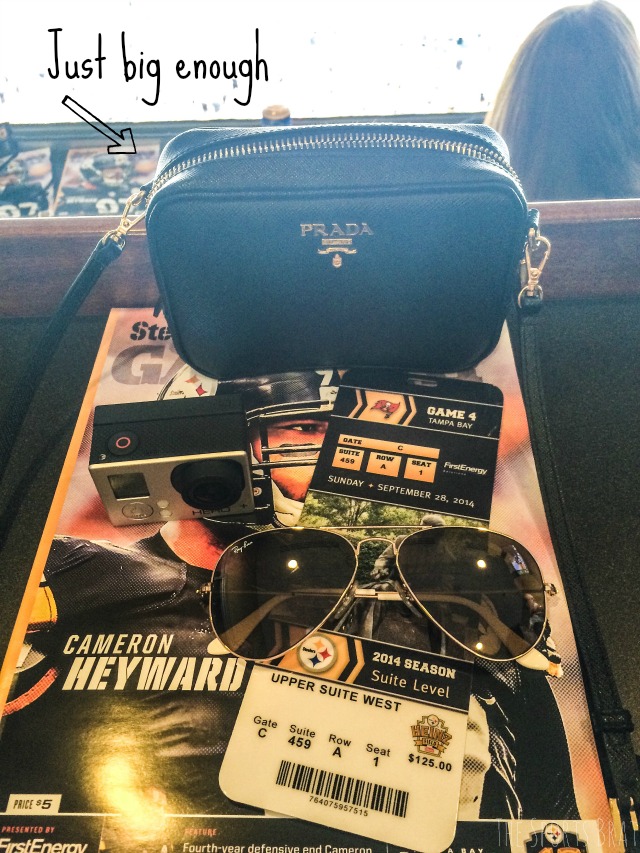 Essentially, you need a wristlet, or one of those expanded cell phone cases. Nothing bigger than that is getting into the stadium. Either you’ll have to throw it away or lug it back to the car – which can be tricky if you utilized public transportation.

It’s not that you have to condense your entire life into a tiny wallet to go to a football game. You are, in fact, allowed to bring your stuff – it just needs to be in a clear plastic bag no larger than a gallon-sized Ziplock. That’s right, just like at the airport, you need to store your belongings in plastic.

Now, the nice thing is that retailers have seen a need, and they have provided for it. There’s a whole selection of football-themed clear plastic totes. Trust me, ladies, at the stadium they are the It bag. 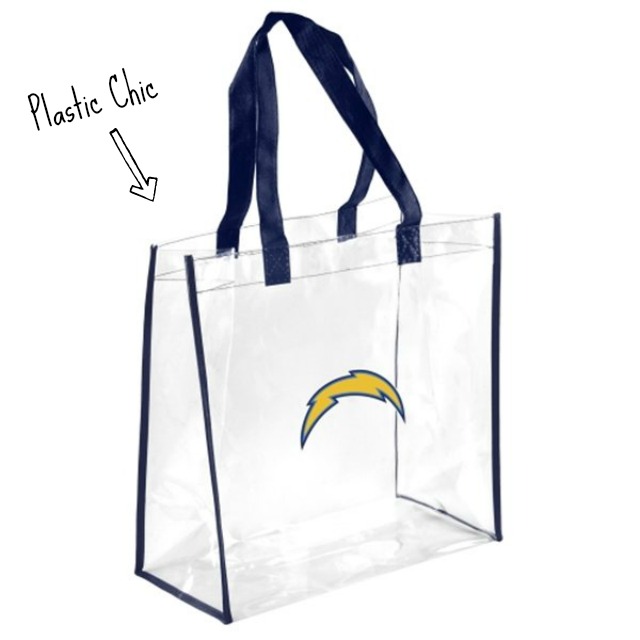 By the way, folding up your regular purse and stashing it in the clear plastic isn’t going to cut it. Security knows you’re just going to unfold it when you get inside the stadium and chuck all your stuff back in. That’s what I would do – but it’s not allowed. We can discuss the why of it, but it all comes down to bad people wanting to do spectacularly bad things – and being super clever about it. Remember the sneaker sitch from awhile back? Yeah, same deal.

So, you’re all set with your wallet-clutch and plastic It bag. Here are few tips on streamlining your trip through security:

While we’re on that topic, a last word of advice. Please ensure any males accompanying you to the game do not have their pocket knife in their pocket. Those are considered weapons because, you know, they’re knives. It doesn’t matter if it’s just a tiny knife your buddy has used to peel every apple he’s eaten since the first grade. If it’s in his pocket he’ll either have to take it back to the car or throw it away. (Yes, just like at the airport – I once had to throw away my Swiss army knife and spend a backpacking trip tool-less.)

Last word — if you really want to streamline your entrance into the stadium, have him throw his change and chew can into your clear plastic It bag. I speak from experience.